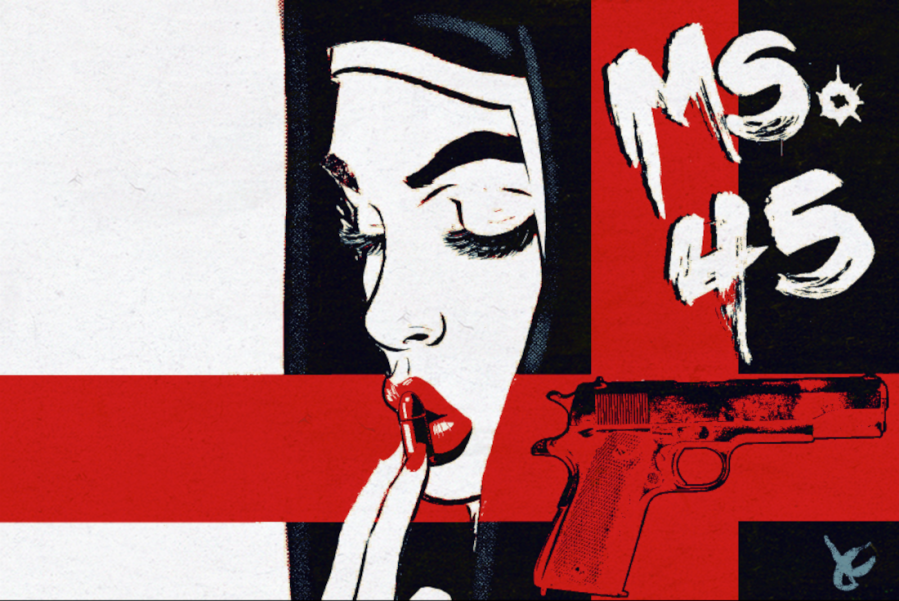 This thing popped up one day as something I’d like to watch – presumably because I searched for drive-in movies – underneath the title were the words ‘cult classic’ and ‘abel ferrara’ followed by (or maybe before) the numbers ‘1981’. I will say that I was put off by those words as well as those numbers but I didn’t have much to do at the time so why not, right? I have to admit that I was also put out by the use of punctuation in the title – is it supposed to be Ms. .45? Doesn’t the Ms come with a period after it like Mrs.? Or MME.? Or Prof.? And doesn’t the caliber of a handgun come with a period before it? PLUS – and this may not ring a bell with you but I distinctly remember an episode of Sledge Hammer where he’s having a fight with this woman and she continues to correct him calling her “Miss” by saying “It’s Mzzzz” and one time he’s had enough and he yells back “It’s Merrrrrrr!” so I had questions about that too. But that’s how my brains work.

For whatever it’s worth, I thought this movie was terrible and irritating from almost start to finish, 80’s, periods or not.

This cute girl who can’t speak works at the local New York guy’s fashion shoppe making dresses. One day, on the way home from the grocery, she gets the Big R in an alley. A little later, when she gets home, she gets the Big R again in her apartment by some burglar in there looking for jewels. This time, she kills the guy and cuts up his body in her tub. While she’s resting, she notices that the apartment robbing jewel thief dropped his handgun on her rug and then the first 15 minutes of the movie are complete.

As the story goes, this seamstress who I presume is untrained in firearms, goes around New York City shooting untoward men with deadly, one shot one kill accuracy – up to and including a Warriors style gang in some sort of ridiculous theatrical ‘dance’ scene that might have been neat in 1981 if you cared about that kind of shit. I remember when I was a kid – my dad’s wife’s sister moved from here to New York City to be ‘a dancer’. I never really understood what that meant but, I guess, that was never my fucking business.

I don’t think I can emphasize how little I cared for this movie. Most of he actors / characters in here are the types of people I LOATHED when I was working in New Jersey with their shitty, hateful, aggressive attitudes. There’s this scene at a lunch place somewhere where this guy offers to buy ‘some broads’ their sandwiches and one of them goes off with the likes of ‘FUCK YOU WHAT AM I SOME CUNT YOU CAN’T BUY US A FUCKING SANWICH YOU FUCKING SHITHOLE CUNT FUCK YOU MY FUCKING SANDWICH EAT MY DICK AND GO FUCK YOUR MOTHER AGAIN YOU FUCKING CUNT MOTHER FUCKER.” and then they head back to the office to sew some dresses. That reminds me of a typical night at the sports bar in the Holiday Inn I stayed in for a year and a half. And I never offered to buy anyone’s dinner. One time I was talking to some dude sitting at the bar next to me and he was leaving and I was all “be safe out there” and he was “BE SAFE WHY WHAT AM I A FUCKING PUSSY WHAT’S TO BE SAFE ABOUT WHY WHAT’S WRONG WHAT AM I A DICK WHAT THE FUCK AM I AN ASSHOLE WHAT THE FUCK?” and I had something witty to say along the lines of “look you yankee fuck i was just trying to be nice go fuck yourself.”

Aside from that slice of new england horseshit that I hate – the sound in this thing grated my nerves the entire time. I don’t know if they still call it this but the ‘incidental music’ consisted of piccolos, a trumpet and some snare drums with teeth grating cymbals And the landlord lady – Ms. Landlady I guess – was THE WORST.

And then – to top it all off – this guy dropped his gun in her apartment. I don’t know much about firearms at all but I would guess those thing probably hold ten or maybe twelve bullets? I could go look it up but I’m way too lazy for that but – Ms 45 had a never ending supply of ammunition to kill people with, even if she was One Shot, One Kill. I’ll try to count here… she killed the hood in the alley, the five gang guys, the arab sheik and his driver, the black pimp, the photographer, the guy from the bar shot himself for some reason and about six people at the Halloween party. What’s that? I count 18 – maybe that’s not unreasonable?

If I have to say that there was anything that didn’t drive me nuts about this thing would be the extended slow motion party murder sequence. But I think it gave us a break from the constant ‘incidentals’ blaring. I guess but they still had that fucking band playing. Sorry if this is one of your favorite movies but I hated this.

FILED UNDER: CRAP with a big finger pointing at CRAP

Note: I dog on New Jersey here a lot because I lived in a hotel there for three weeks out of the month for a year and a half and I hated everything about it. The ONE time someone there was nice enough to take me out to lunch (which I had to buy btw) we went to some sandwich restaurant. It took an hour and a half to get there (which is not uncommon for NJ traffic) and the sandwich was really forty fucking dollars but it was DELICIOUS. It was also as big as a large pizza and came with a pickle and pepper bar that was just amazing.

I’m pretty sure it was this place but the website sucks but that is also not uncommon for new jersey:

This picture looks about right: